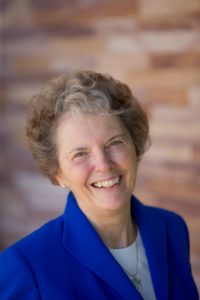 A Sister of the Presentation of the Blessed Virgin Mary, Sister Joyce Meyer served as executive director of the Conrad N. Hilton Fund for Sisters, a grantmaking organization supporting the works of Catholic Sisters globally, from 1999 through October 2011. Currently she is a consultant to organizations who work with Sisters, particularly in Africa and Asia. Sister Joyce serves on the board of directors of Medicines for Humanity and on an international advisory board for Good Shepherd Sisters Global Missions.

She worked for five years as a missionary in Zambia. Prior to this she ministered as a teacher, a spiritual director, a director of formation, and a conference facilitator. Following her time in Africa, Sister Meyer served in leadership in her congregation for 12 years, eight of which she served as president. She held the position of president of the corporate board of the Presentation Health System based in Sioux Falls, South Dakota, and served on the sponsorship board of the National Catholic Health Care Association for four years.

Sister Joyce initiated and directed a reorganization of her congregation’s health system, which led to a successful merger of two health systems in South Dakota. She has published articles in Health Progress and Catholic Health World. Sister Meyer also served as secretary for the National Conference of Presentation Sisters for four years, during which time she initiated a proposal to establish the International Presentation Sisters Association as a non-governmental organization in special consultative status with the United Nations.

Her education includes degrees from Marquette University and Catholic Theological Union at Berkeley.