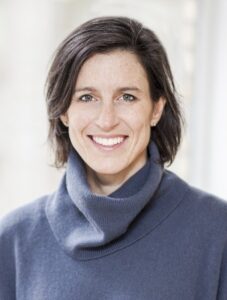 Sarah Smith leads the Conrad N. Hilton Foundation’s Refugees initiative, partnering with refugees and host communities to improve the lives of children and families affected by conflict and displacement. Smith has worked in the humanitarian sector and as an educator throughout Asia, Africa and the Middle East for 25 years. Prior to joining the Foundation, she was the head of Education, Child Protection and Youth Livelihoods for the International Rescue Committee (IRC), and was named a “Leading Global Thinker” by Foreign Policy Magazine in 2016. At the IRC, Smith led the design of several historic programs, including Ahlan SimSim, an early childhood program in Iraq, Jordan, Lebanon and Syria, led by Sesame Workshop and funded by the MacArthur Foundation’s inaugural 100&Change prize, and PlayMatters, a $100 million education program in East Africa funded by the LEGO Foundation. Smith was instrumental in starting the IRC’s Research, Evaluation and Learning team and has been at the forefront of bringing rigorous, actionable research into humanitarian settings. She began her career as a Head Start preschool teacher and was a Peace Corps volunteer in Namibia. Smith earned a master’s degree in international education policy from Harvard University Graduate School of Education, and a doctorate in education from Columbia University Teachers College.