Member, Board of Directors since 2005 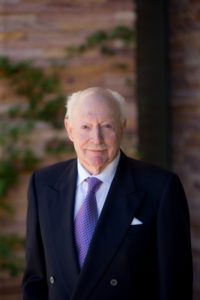 John Notter serves as chairman of the board for the Ludwig Institute for Cancer Research, an international community of distinguished scientists dedicated to preventing and controlling cancer, and as a trustee of the Virginia and D.K. Ludwig Fund for Cancer Research).

In the past, Mr. Notter served as chairman of the audit committee as a member of the Hilton Hotels Corporation board of directors and chairman of Princess Hotels International, Inc. He concurrently served as president of Universe Tankships, Inc., and National Bulk Carrier, Inc.—one of the world’s largest providers of tankers and shipping services. Mr. Notter has served on the boards of Financière Crédit Suisse First Boston in Zurich, Swiss American Corporation and Suntory Industries of Japan, and York-Hanover, Ltd. in the U.S. and Canada. Additionally, he was a member of the advisory board of Chemical Bank of New York, Columbia University, and the Frank W. Jobe Foundation in Los Angeles.

From 1964 to 1980 Mr. Notter was president of the D.K. Ludwig Group, an international network of companies with major interests in real estate, hotels, shipping, insurance, agriculture, and mining. He also served as chairman of American-Hawaiian Steamship Company, the developer of a major master-planned community in Westlake Village, California.

Born in Zurich, Switzerland, Mr. Notter immigrated with his family to the United States in 1941. After serving in the United States Army, he graduated from Pasadena City College and California State University, Los Angeles. In 2006, He received an Honorary Doctor of Laws Degree from California Lutheran University.