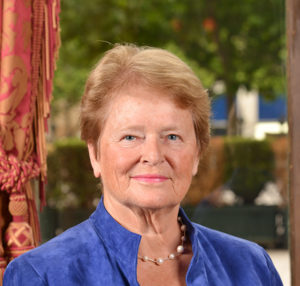 Dr. Gro Harlem Brundtland is the former director-general of the World Health Organization (WHO) and the former prime minister of Norway—the first woman and youngest person to serve in that role. She has provided leadership on issues of global significance for more than four decades. Brundtland served as one of three United Nations Special Envoys for Climate Change, having been named to that position in May of 2007 by U.N. Secretary General Ban Ki-moon. In 2007, she also became a member of The Elders, a group founded by Nelson Mandela and Graça Machel and led by Archbishop Desmond Tutu. Recently, Brundtland served on the United Nation’s Panel on Threats, Challenges, and Change. She is member of the board of the United Nations Foundation.

In the 1980s she chaired the World Commission on the Environment and Development―the Brundtland Commission established the concept of sustainable development in its landmark report, Our Common Future. The commission’s recommendations provided the momentum for the United Nations Earth Summit in Rio de Janeiro in 1992.

During her tenure as director-general of the World Health Organization, Brundtland’s rapid response to the global threat of the SARS virus is largely credited with helping prevent the widespread growth of the disease. She also succeeded in garnering support for the first negotiated agreement on a major public health issue, The Tobacco Convention, and was recognized that same year as Scientific American’s “Policy Leader of the Year.” The recipient of many honors, perhaps her most prized award is the unofficial title she holds in her native Norway, where she is affectionately known as “Landsmoderen” or “mother of the nation.” Dr. Brundtland is a graduate of Oslo University and the Harvard School of Public Health.