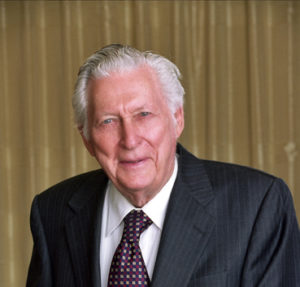 Donald H. Hubbs was an instrumental figure in the history and development of the Conrad N. Hilton Foundation. He joined the Foundation as assistant secretary treasurer in 1969 and served in various leadership roles—as Foundation president, chairman, and chief executive officer—in the 36 years that followed.

Following Conrad Hilton’s death in 1979, as the Foundation prepared to assume its place among the nation’s largest philanthropic institutions, Hubbs diligently protected the intent of the founder’s last will and charge to improve the lives of disadvantaged and vulnerable people throughout the world. In concert with the board of directors, he began to translate noble, charitable goals into specific, practical actions.

Embodying Conrad Hilton’s motto, “think big, act big, dream big,” Hubbs’ leadership was characterized by initiative. In 1982 he gained the Foundation board’s support to adopt a proactive, major project approach to grantmaking, rather than simply reacting to incoming requests. Seeking to use Foundation resources to generate an impact extending far beyond the grant period, Hubbs took a long-term view, targeting areas that might have otherwise remained unexplored. In many ways, this proactive approach has influenced the Foundation’s ability to impact lives around the world. Some of the initiatives in which he played a key role include:

Hubbs received a Purple Heart for his service as a U.S. Army lieutenant. A certified public accountant and attorney, Hubbs worked for 22 years as an accountant and also maintained a private law practice for more than 25 years.

He served on the board of directors of the Michael Alan Rosen Foundation and the board of counselors of USC Law School. Hubbs served as director emeritus of the Conrad N. Hilton Foundation as well as the BEST Foundation. He was a regent at Mount St. Mary’s College and a former president of Southern California Grantmakers. Hubbs received humanitarian awards from the National Council of Juvenile and Family Court Judges and the Perkins School for the Blind, as well as an Honorary Doctor of Law degree from Pepperdine University. In addition, a professorship is named for him at the University of Houston.