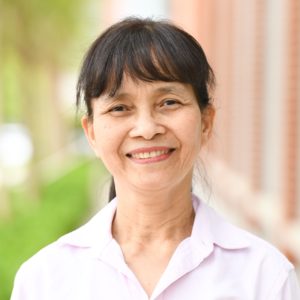 Aquina Von Biela joined the Conrad N. Foundation as cashier in December 2018. She has many years of customer service experience. Prior to joining the Foundation, she worked as a cashier for the Dole Food Company, Amgen and Taco Bell.

Von Biela grew up on a farm in the Philippines on the island of Mindanao, their main crop was corn but they also harvested coconuts, cocoa and coffee beans. As a young adult, she moved to the city of Manila and worked as an electronic assembler, met her husband and moved to the United States. Von Biela has two children and three grandchildren.